This scholar paper is aimed to publish the explosion parameters of carbon monoxide / methane and air mixtures. This data could be used by various commercial companies to establish explosion safety rules for the use of these mixtures. During this work, we studied the flammable gases separately and then their mixtures. First, the explosion parameters were obtained by numerical simulation. Secondly, explosion tests were carried out in the 20-L explosion vessel for different conditions (variation in initial temperature and concentration ratio of the mixture). Finally, all the results obtained were compared with the numerical predictions in order to obtain a complete information for appropriate safety solutions.

It is important to know that explosions are common phenomena in the industrial sector and that a lot of people have already died because of them. The CSB investigation site is a site that recites industrial accidents due to explosions. There are many examples that prove that this happens regularly. Here is an example: In June 2013, 2 people died and 167 seriously injured in a blast and fire in Williams Geismar Olefins Plant. The explosion was due to an overpressure from a reboiler. The overpressure caused a catastrophic rupture of the vessel shell, which then caused boiling liquid expanding vapor explosion and fire. But this is not the first time this has happened, the CSB investigation site includes many industrial incidents that have resulted in the deaths of several people. Other examples: BP refinery (Texas 2005), West Fertilizer Company (West 2013).

An explosion is a sudden big blast wave (or a sudden and significant pressure and heat rise) produced by an exothermal reaction in a confined space. The main difference between explosion and fire is the combustion reaction’s velocity.

The explosion parameters obtained thanks to the chemical software are the adiabatic explosion pressure (Pad [bar]) and the adiabatic flame temperature (Tad [K]). These parameters are useful to get an idea of the power of the explosion and the damage that could be caused. We will be able to see that these parameters vary a lot depending on the gas used and the initial conditions. Thanks to the tests in the combustion chamber, we will have three other parameters: the maximal explosion pressure (Pmax [bar]), the maximal rate of pressure rise ((dP/dt)max [bar/s]) and the time delay after ignition (tc [s]). 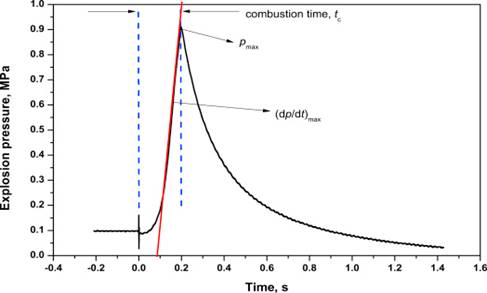 The explosion delay time is the time spent between ignition and arrival at maximum pressure. (dP/dt)max is an important parameter because it allows to calculate the deflagration index KG which allows to classify the explosion according to its robustness. Maximum explosion pressure (pmax, MPa) is the maximum pressure, emergent by explosion in a closed vessel with initial pressure 101.325 kPa.

Explosion characteristic values of the were determined experimentally according to the EN 15967:2011 [1].

The 0.02 m3 (OZM Research, s.r.o.) oil-heated spherical vessel setup was used to record pressure–time curves. The test apparatus consisted of a test vessel, an external cooling system, a setup for special atmosphere development (vacuum pump, dispersion nozzle, and high-pressure air), pressure and flash measuring systems, a discharge type ignition system, a temperature measuring device, a user interface, and a data storage system. The test vessel was designed to withstand a working pressure of 30 bar. For testing, the explosion vessel was cooled to the desired temperature of 0–20 °C.

The 0.02 m3 apparatus incorporated a digitally adjustable external control device Presto A30 (SN: 10291377, JULABO GmbH, Seelbach, Germany) that heated the oil in the instrument to the specified temperature range.

The initial temperature of mixtures was measured with an accuracy of within 1 K. The test mixture was prepared by a partial pressure method with maximum sampling uncertainty ±0.2%. The evaporation of samples in both vessels was supported by two systems. First, the procedure started with evacuation to the initial conditions under a pressure of 0.40 bar in the 0.02 m3 setup. The sample mixture was blown into the evacuated chamber by a dispersion pressure of 5 bar. In the 0.02 m3 system the dynamic pressure in the vessel was measured by a pair of quartz pressure sensors (SN: 4512821 and SN: 4512822, model 701A, Kistler, Winterthur, Switzerland) and recorded with a charge amplifier (Kistler, model 5041E0). The pressure measuring range for the sensors was within 25 bar. The data acquisition sampling period was 0.02 ms with a sampling frequency 50 kS/s. Programmable logic controller (model 5073A211, Siemens, Munich, Germany) connected to a PC was used with the interface (PROMOTIC system, MICROSYS, spol. s.r.o., Ostrava, Czech Republic) to automatically control the whole testing procedure. The experimental setup is schematically introduced in Figure 2. 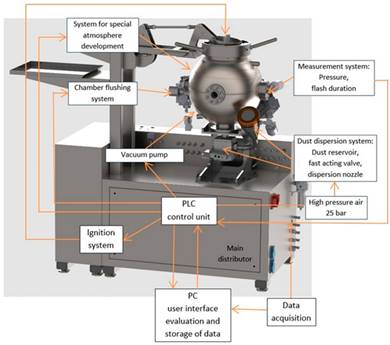 The pex was determined as the highest value of the pressure–time curve divided by the initial pressure for the actual equivalence ratio. The pmax is the highest explosion pressure for all equivalence ratios divided by the initial pressure. The value of (dp/dt)max decreases with increasing vessel volume. Therefore, (dp/dt)max is for 0.02 m3 recalculated to a vessel volume (V) of 1 m3. The maximum explosion pressures, the deflagration indexes, and the explosion delay times were obtained from pressure time records. The explosion delay time, tex, is the time at which the maximum explosion pressure is reached. The experimental uncertainty in a statistical sense is given by the used experimental method and is 10% for explosion characteristics according to EN 15967:2011 [1].

The influence of temperature on explosion pressures at eleven concentrations for pure CO-CH4-air mixtures have been described in [2-3]. Method for calculating equilibrium compositions at a specified temperature have been used. The method is based on the minimisation of free energy (NASA method). The maximum possible concentration of each species, based on the availability of each element it contains, is identified and the estimate passed to each solution iteration is not allowed to exceed this value, or fall below zero. This is intended to prevent the solution entering unrealistic regions where it is less likely to converge. Reactants with zero concentration and products containing elements with zero concentration in the reactants are not passed to the DLL. The temperature of the products is adjusted until the equilibrium composition has an enthalpy (or internal energy under constant volume conditions) which is the same as that of the reactants. A starting estimate is improved using the secant method [4].

The results of fuel–air mixtures were used to predict the initial values for pure CO-CH4-air measurements, as presented in Figure 3-4. 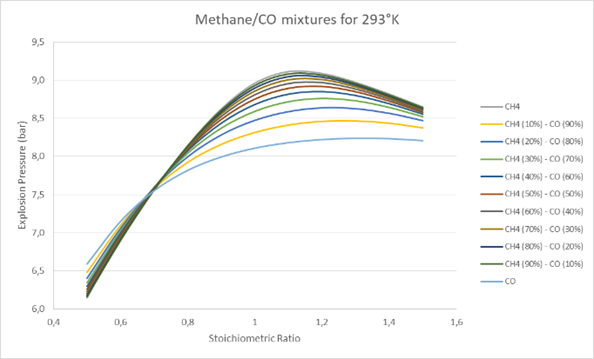 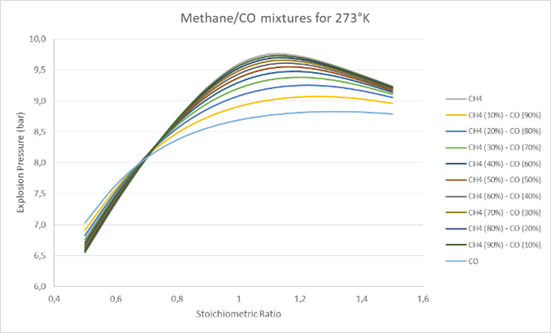 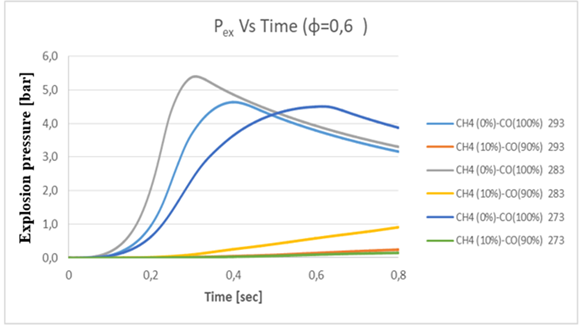 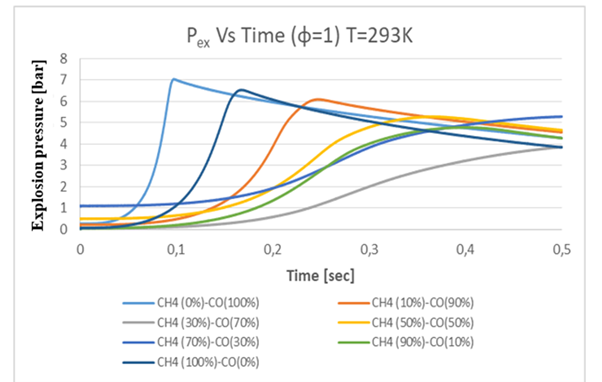 Figures 5-6 illustrates the effects of initial mixture composition and temperature on the explosion pressure. Concerning the graphs, the CO curves are much faster than the mixture curves. Initial temperature(Tinit)influences time of combustion (Tc). As an evidence we can see that for Tinit=283 [K], Tc is higher than 0.6 [s] whereas when Tinit=283 [K], Tc is around 0.3 [s]. For stoichiometric mixtures, the times vary considerably depending on the temperature and the proportion of methane in a mixture. It is not possible to establish a kind of graduation scale. For Tinit = 293 [K], for mixtures, 10% CH4 mixture is the fastest. For Tinit = 283 [K], the fastest mixture is 90% CH4 and for Tinit= 273 [K], the fastest mixture is 90% CH4.

This work would not have been possible without the financial support of the grant Innovation for Efficiency and Environment - Growth, reg. no. LO1403 supported by National Programme for Sustainability and financed by the Ministry of Education, Youth and Sports and specific research SP 2019/89.

[1] EN 15967. Determination of Maximum Explosion Pressure and the Maximum Rate of Pressure Rise of Gases and Vapours. Brussels: European Committee for Standardization, 2011.